A conversation with Dr. Ryan Fortna of ADx Healthcare 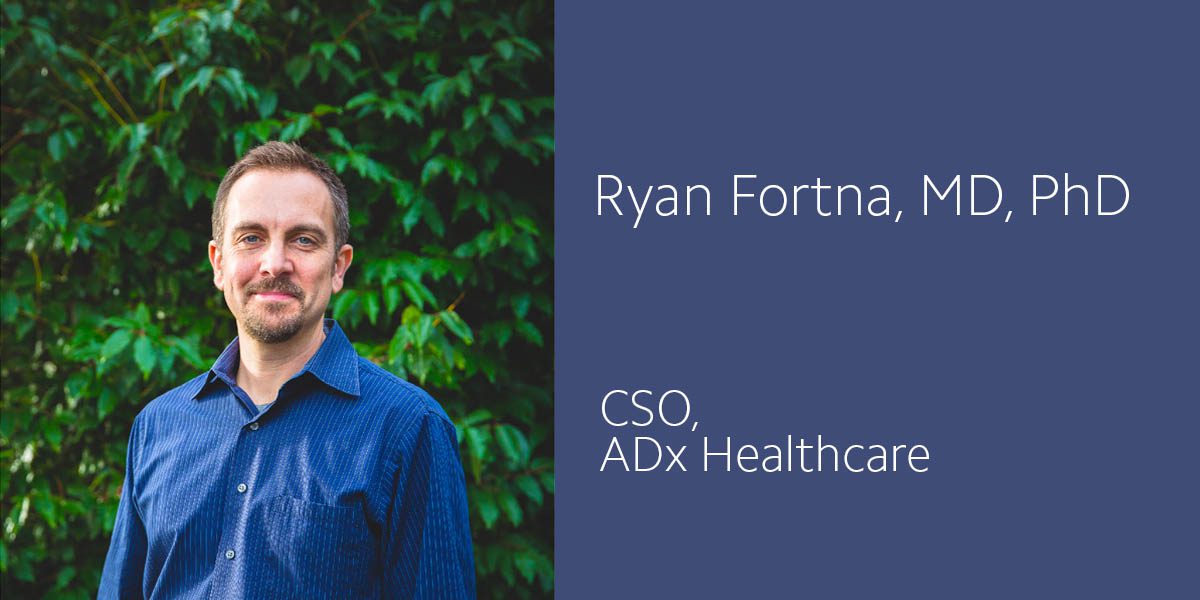 DNA insights are more accessible than ever before, a trend that promises to help individuals take more active roles in managing their health and wellness. At the same time it is important that consumers who take advantage of these insights have access to the resources and support they need—genetic counseling, for example—in order to fully understand their results, how to decide if they want to share them with their family, and how to get started implementing their results with the actionable insights in their report.

A great example of cutting-edge DNA insights, comprehensive customer resources, and world-class support coming together can be found in the Alzheimer’s ApoE Test from ADx Healthcare (click here to see the product details). Ryan Fortna, MD, PhD, CSO of ADx Healthcare, shared his thoughts with us on some important questions about Alzheimer’s disease genetic testing and the future of Alzheimer’s care and prevention.

As a physician, why did you want to develop an ApoE genetic test for late-onset Alzheimer’s disease in partnership with Helix?

I believe that everyone has a right to understand his or her own genetic makeup, with appropriate physician and/or genetic counseling oversight to ensure that the information is understood in an appropriate way. The medical community and our society in general are increasingly recognizing the value of genetics as a powerful predictor of disease risk, and the ApoE gene has been well known for decades to be the most important genetic risk factor for Alzheimer’s disease, occurring after age 65. I felt that it was important to make this test available to everyone who wants it, and that it was important to provide an option that includes appropriate medical oversight and genetic counseling to ensure that all who take part in testing are able to fully understand their results.

Is this a test for the hereditary form of Alzheimer’s disease?

Alzheimer’s disease can also be classified based on age of onset into early-onset and late-onset groups. Patients diagnosed before the age of 65 are considered early-onset, while patient diagnosed at 65 or older are considered late-onset. Late-onset is far more common than early onset. Patients with PS1, PS2 and APP abnormalities are almost always diagnosed at an early age, which is why this group is also called early-onset familial AD. However, the majority of patients in the early-onset group are not eFAD patients with PS1, PS2, or APP abnormalities. ApoE is primarily a risk factor for the common, late-onset form of Alzheimer’s disease because that is by far the more common form. However, ApoE is also a risk factor for early-onset Alzheimer’s disease, just not the “familial” (eFAD) form of it.

The main difference between ApoE and PS1/PS2/APP is that ApoE is just a risk factor, while PS1, PS2, and APP are deterministic genes, meaning that abnormalities in one of these genes will cause the disease in essentially 100% of patients who inherit the abnormality. However, because these eFAD genetic abnormalities are extremely rare, while the non-familial form of Alzheimer’s disease that ApoE is associated with is much more common, ApoE genetics is a much more important risk factor for the population as a whole. The Alzheimer’s ApoE Test that we are offering in the Helix Store will help people determine their genetic risk for the most common form of the disease: non-familial (“sporadic”) Alzheimer’s.

What do you feel is the future of Alzheimer’s disease treatment and prevention based on what we know today?

The focus for years has been on testing drugs that would hopefully treat patients who are already at a clinically diagnosable phase of the disease. Although there is still an interest in pursuing these types of treatments, all candidate drugs using this approach have failed in clinical trials thus far. Attention is starting to shift to testing drugs in the pre-symptomatic phase of the disease, or even earlier. This makes sense from a biologic perspective, because the changes in the brain that cause the disease start occurring many years before symptoms are apparent. The individuals who will be the best candidates to participate in these types of clinical trials—and eventually to receive these preventive therapies—will be those with a higher risk of disease based on genetics (such as ApoE) or evidence of early disease based on imaging or biomarker studies.

Additionally, more attention is being given to modifiable risk factors. These are non-genetic risk factors that can be modified and potentially reduce the risk for Alzheimer’s. Many factors affect an individual’s risk for the disease, including certain medical conditions, lifestyle, and diet. Early trials indicate that modifying these risk factors may improve cognition in older patients and reduce the risk of progressing to symptomatic Alzheimer’s disease, and other similar trials are underway. Similar to pharmaceutical-based preventive measures, some of these trials will be focused on patients with higher risk based on genetics or family history.

If you could tell individuals with dementia in their family tree one thing, what would it be and why?

The most important thing to understand is that the changes in the brain that cause late-onset Alzheimer’s disease are actually starting to occur decades before the disease is clinically apparent. So if you want to make sure that you’re in the lower-risk categories—for example, by taking control of your diet and lifestyle choices and appropriately managing any relevant medical conditions—then you should strongly consider doing this as early as possible, even in your 30s and 40s. This is a smart choice for everyone, but especially for those with a strong family history of dementia or with genetic results that indicate an increased risk.

Some organizations fear that patients may not be emotionally equipped to handle information about their own genetic risk factors for Alzheimer’s and other diseases. While it is certainly true that this testing should have appropriate physician oversight and genetic counseling as needed, individuals should be able to choose for themselves whether an ApoE test is right for them. Just having this knowledge can empower people to make more informed life decisions, which for some, is a powerful tool.

It’s important to remember that many diseases do not have “cures,” and yet there are numerous lifestyle, diet, and medical interventions that are commonly used to reduce risk for these diseases and to improve outcome—this is true with heart disease, for example. Similarly, there is increasing evidence that there are many lifestyle and medical factors that affect Alzheimer’s disease risk, and both early clinical trials and common sense suggest that modifying these factors in a positive direction is worthwhile. Genetics is just one component of risk, but for many it is a powerful component and can be an important motivator for making healthy lifestyle and medical choices.

The Alzheimer’s ApoE Test from ADx Healthcare can be found here alongside other health related products.