The 6 best Weekly Genes from our first year 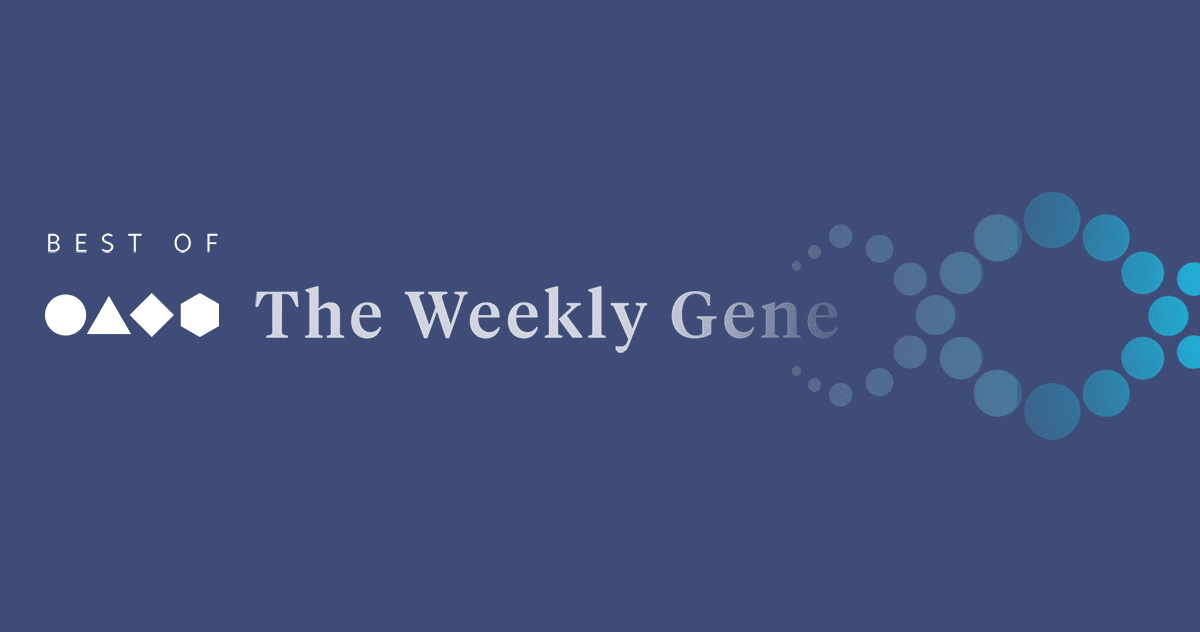 It’s been over 52 weeks since the Helix Store opened. It wasn’t long after that we debuted a blog series called The Weekly Gene where we highlight a different human gene each week. Since it started, we’ve explored genes that may have helped humans grow large brains, genes that we share with snakes and plants, and genes that explain human development and disease. We think of it as a great way to build your DNA vocabulary, learn more about the code that makes all of us unique, and find a path to the genetic insights that are important to you.

Though we’ve been writing for a year, we’ve only scratched the surface. With almost 20,000 genes in the human genome, The Weekly Gene has a lot of ground left to cover. Nonetheless, we’ve explored some interesting, unexpected, and unique aspects of genetics. In honor of our one year anniversary, we’ve compiled six blogs that our readers and Helix staff particularly enjoyed. If you don’t see your favorite here, tweet at us so we know which one you enjoyed most!

#6: Sneezing from the sun? Could be ACHOO syndrome

What causes a person to sneeze? There are the common culprits: pollen, cats, and dust. Then there’s the sun. When this happens, it may be the result of variants near the ZEB2 gene which are associated with Autosomal Dominant Compelling Helio-Ophthalmic Outburst Syndrome, also known as ACHOO syndrome. Read the full article to find out more.

#5: Checking the CLOCK in your DNA

Almost all living things have a natural rhythm to them—a periodic cycle of that goes from wide awake to deep in sleep. But why is that? The answer is more genetic than you might think, and it involves a gene called CLOCK. Dive into sleep as we explore the CLOCK gene further.

Light travels millions of miles through space to ultimately end its journey in the back of your eye. Though, the energy stored within that light doesn’t stop—it transfers from light into the energy we need to see the world around us. The OPN4 gene produces a protein that helps us capture this solar energy and convert it into visual images. See how this happens and more by looking closely at OPN4.

#3: This gene helps your cells breathe

Breathing is so natural to us, we often don’t think about what happens to the oxygen after entering our lungs. Somehow, the air we breathe has to be transported throughout our body so that our brains, muscles, and other tissues can use it. This is where the HBB gene comes into play. Learn how oxygen moves through the body and what role it has to play in disease by reading about the HBB gene.

#2: What role does DNA play in Familial Hypercholesterolemia?

Approximately 90% of people who have a condition known as Familial Hypercholesterolemia (FH) don’t know they have it. FH causes chronically high levels of cholesterol which predisposes a person to serious health conditions affecting the heart. Fortunately, DNA sequencing can help identify FH before health complications arise. Learn more about this condition and one of the genes responsible through exploration of PCSK9.

Each gene covered so far has gathered its own audience, but none have gained as much attention as this next gene. The most popular Weekly Gene we’ve published so far is…


#1:The genetics of a freckle

Ready to learn about another batch of amazing genes in the human genome? We’ve got you covered! Stay tuned for more of our Weekly Gene series in the weeks and months ahead.