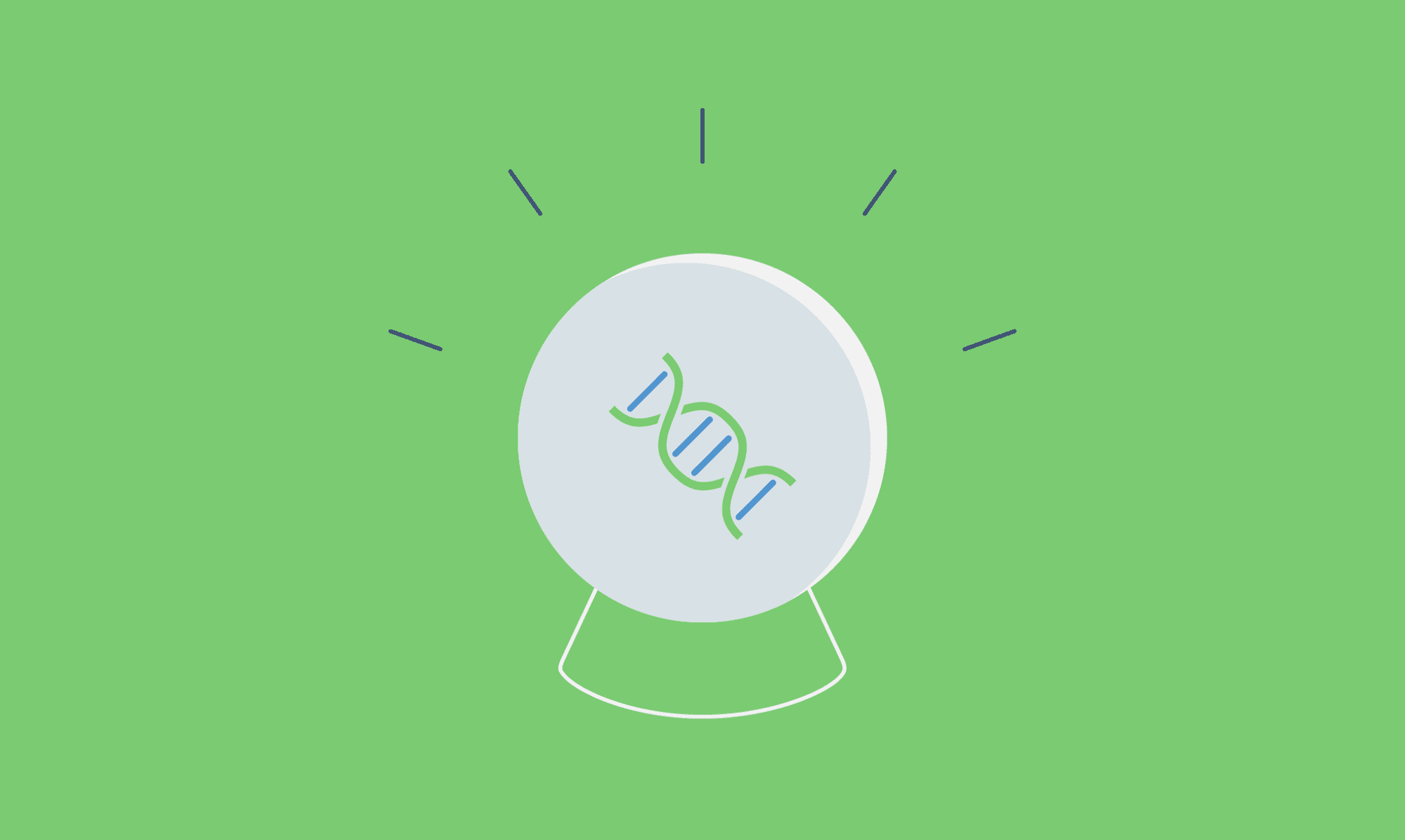 Considering the exquisite and fantastic complexity of the human body, it’s remarkable we all start out the same — as a single cell containing DNA passed on to us by our mother and father.

It’s been that way since the beginning of humanity (well, actually much earlier than that, but that’s another topic): your parents pass their genetic information on to you just like their parents did to them. Every cell in your body traces back to this single cell, the starting point for your genetic inheritance.

Within this combination of paternal and maternal DNA lies our unique genetic code — the source of many of our characteristics and traits. Height, eye color, curly hair, sensitivity of taste, tendency to baldness, and certain genetic diseases? They all derive from that single cell and your unique mix of DNA from your two parents.

But how much are we defined by our DNA? What about the nurture part of nature? A complex combination of factors influence whether or not we inherit genes for certain traits, and even if we do, whether, or not, they manifest themselves. There are many steps between what you inherit and whether it will result in an observable trait. And each of these steps can be influenced by a variety of factors such as diet, environment, medication, exercise, or even random chance.

So is your DNA your destiny? Yes. And no.

A region of our DNA that is responsible for, or said to “code for,” an inherited feature (usually a protein) is called a “gene.” For example, the genes for curly hair would be said to, “code for the proteins that result in curly hair.” Genes are to DNA like books are to a library: specific areas of information within a vast body of knowledge.

Our DNA contains over 22,000 genes that code for proteins. But not all of those genes are used all of the time or in every cell, and most genes can even make multiple different versions of a protein. Your DNA contains a set of instructions that determine how much of a particular protein to create, which is called “gene expression.” And a number of different factors can influence the expression of a particular gene.

Genes that are being expressed in a cell are said to be “turned on,” and genes that are not being expressed are said to be “turned off.” The gene for insulin, for example, is often turned on in the beta cells of the pancreas in order to respond to rises of sugar in the blood stream. The insulin gene is rarely turned on in other cells, and it is also turned off in beta cells when the blood sugar concentration goes down.

The ability to influence gene expression is one way in which external factors, such as the food you eat and your resulting blood sugar, can influence how the DNA instructions we inherit are carried out. An environment we create (like the high blood sugar in our bodies) initiates a response to which we are genetically predisposed. So in an instance like this, whether this gene is expressed or not, is responding to the choices we make when we have a snack. Other genes are less responsive to environmental influence, like the ones that determine if your hair is curly.

The outcome of which genes are turned on or off, and what variants are or are not present, defines an individual “trait.” Some traits are clearly visible (like curly hair or brown eyes), but others are not easy to see (such as the risk for developing a disease, like heart disease).

Sometimes a single variant can lead to an entire trait, but most traits are the result of many complex interactions of genes turned on or off and variants in many different genes influencing the way many different proteins interact. Yes, it’s complicated, but it’s also why it’s so interesting to study.

You and I share 99.9% of our DNA, but we are still clearly different people. We share many traits that are basic, or even essential, like having a beating heart. The difference between your traits and my traits is called variation, and these differences are normal and an important part of what makes every person unique.

Variants aren’t necessarily negative. The variants for eye color might give us brown or blue eyes. But in some cases they do cause disease; like a variant in the gene for the protein that carries oxygen in our blood that causes sickle cell anemia.

A gene on any given chromosome of a pair (for any chromosome except X and Y in men) has a gene that matches on the corresponding “sister” chromosome. For example, you inherit a gene that influences hair type from both your mother and father. These matching genes can differ slightly in their exact DNA sequence and these differences are called “variants.” Keep in mind you get these genes from two different people, your mother and father, so it’s to be expected, and totally normal — there will be differences.

For instance the information that determines our ABO blood type is located on chromosome 9. There is a gene that codes for an antigen (a type of flag for the immune system) that is expressed in your blood cells. Different variants of this gene determine if this antigen is the “A”, “B”, or neither type (“O”), and the combination of your two variants determines your blood type. We inherit an A, B, or O variant from each of our parents, and the combinations that arise from the pairings of the A, B, and O variants in these genes are responsible for the blood type we inherit: A, B, AB, or O. Your immune system recognizes your blood type, and it’s important to match blood types correctly if you ever need a blood transfusion.

Because we have two copies of every gene (one from mom, one from dad), variants in each copy of the gene have different impacts. Consider a variant that results in a protein that no longer works properly. Your cell still has proteins made from the other copy of the gene, and this is often good enough to get the job done. If the mom protein isn’t working properly, the dad protein can help out.

In order to see the impact of the variant on the trait, you would need to have protein-breaking variants in both copies of the gene (from both parents) — these are what we call “recessive” variants, since a single variant can have its role covered by the other copy of the gene. For example, blue eyes are recessive to brown eyes. There are only a few proteins responsible for producing the brown pigment in our eyes, but just one working copy of each protein is needed to make enough pigment for brown colored eyes. Both copies of each protein need to be recessive for you to have blue eyes. The opposite of recessive is “dominant.” Brown eyes are dominant to blue eyes in this example.

Biological sex is inherited differently from other traits that we’re discussing here. The “sex chromosomes”, X and Y, are still inherited as a pair, but do not match each other the way that the autosomes do.

Similarly, males tend to develop color-blindness much more frequently than females as the chief genes for color vision are carried on the X-chromosome, and women are protected from problematic genes on one X-chromosome by the presence of normal genes on their other X-chromosome, whereas males are not.

Inherited DNA is not necessarily destiny

Eye color, or biological sex, are easy examples for inherited traits because they are determined by a small number of genes, with a few variants that make a large impact. There is clearly strong genetic influence in your blue eyes and curly hair.

However, the majority of traits that we have are determined by many different genes, and variants in these many genes each have very small impacts on the final result.

Also, some traits are influenced equally, or even moreso by the environment. Other diseases are influenced, but not necessarily determined, by inherited genes. A clear example is breast cancer. Two specific genes, BRCA1 and BRCA2, are associated with an increased risk of breast cancer — but testing positive for either of these genes does not mean that you will get breast cancer.

There are a number of examples of where genetic characteristics interact with diet and environment to influence the development or non-development of disease or undesirable condition — that is, other examples where genetic inheritance is influential but not destiny.

One example is type 2 diabetes, where a person may have a genetic predisposition to develop the disease, but may only show signs of the disease if he or she adopts a carbohydrate-rich diet, putting extra strain on the particular vulnerable metabolic system he or she has inherited. Furthermore, a change from a carbohydrate-rich diet to a low-carbohydrate diet can moderate or sometimes even reverse symptoms of type 2 diabetes, despite the genetic predisposition.

The DNA we inherit from our parents has a lot to say about what we’ll become, but it’s not a crystal ball that foretells our entire future. Much of our DNA destiny is in our own hands — in our habits, diet, and other factors in our environment. And the more we know about our own genetic story, the more we can do to help ourselves live happier, healthy lives.

To learn more about Helix, and our DNA products and partners, visit helix.com.