How one gene may contribute to late-onset Alzheimer’s development 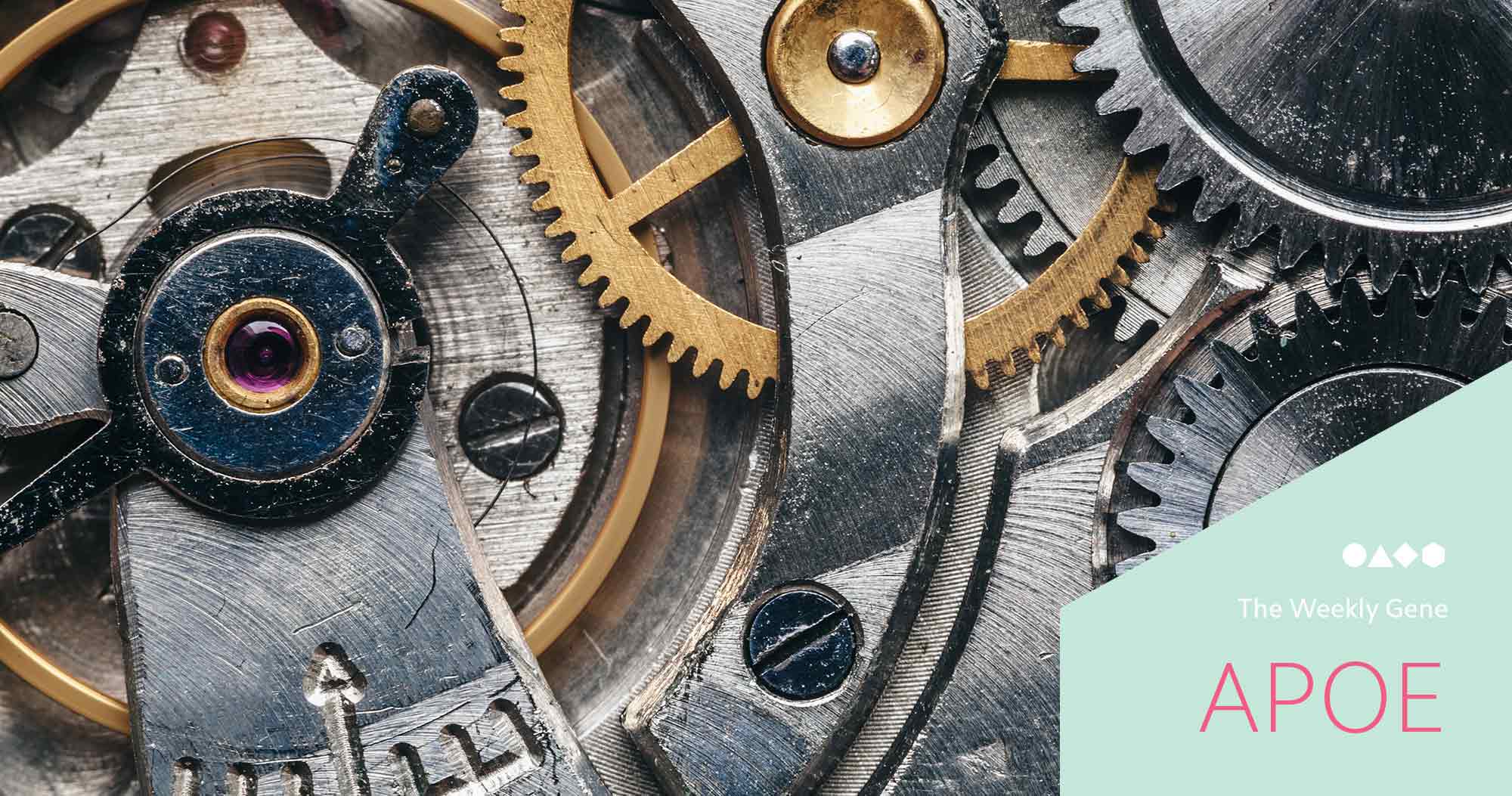 We’re all familiar with that sinking feeling that sets in when you have somewhere to be, the minutes are ticking by, and your ride still hasn’t shown up. If it were simply a matter of being late, that wouldn’t be a problem. But being late can set off a domino effect that results in chaos for you later in the day. Such is the nature of a busy life: Small hurdles in one step can affect seemingly unrelated steps down the road. This holds true at a molecular level as well. Today, we’ll focus in on one particular example of this where changes in just one gene, the APOE gene, have a domino effect that may ultimately result in the development of Alzheimer’s disease.

Approximately 30 million people worldwide are affected by Alzheimer’s—a disease that affects a person’s ability to remember and process everyday tasks1. Normally, our brains are alive with a series of neurons firing away in a symphony of thought. Within each of those cells is a busy ecosystem of genes, proteins, ions, and chemicals that all work to keep our neurons functioning and healthy. When something happens to disrupt this ecosystem, neurons can progressively deteriorate and eventually lead to diseases like Alzheimer’s. At a cellular level, deterioration of neurons happens due in part to the toxic buildup of a protein fragment called amyloid beta (Aβ). Exactly what causes this buildup is still unknown, but many signs point to changes in the APOE gene1,2.

Alzheimer’s cannot be cured, but it may be possible to delay it’s onset

APOE, or apolipoprotein E, is a gene that produces a protein by the same name (it’s a common practice to name proteins after the gene that produces them). The APOE protein helps transport cholesterol and other fat molecules through blood vessels and between cells. In the brain, APOE appears to have additional roles that go beyond fat transport and extend into regulation of neuronal growth and health1. What role APOE plays in this process is still being worked out, but research indicates that APOE may be an important member of a signaling network that controls the levels of Aβ buildup. Because of this potential role, variants in the APOE gene that disrupt APOE protein function can have a domino effect that leads to Aβ buildup and potential progression into Alzheimer’s disease1,2.

There are three different versions of the APOE gene: APOEϵ2, APOEϵ3, and APOEϵ4. Though the difference between each version is small, the effect of inheriting one instead of the other is large. For example, people who inherit APOEϵ4 are less able to regulate the amount of Aβ buildup. Though it’s unclear exactly how this happens, research suggests APOEϵ4 is less efficient when it comes to offloading fats and cholesterol inside of a neuron2. It’s hypothesized that this creates the equivalent of a traffic jam inside the cell and causes numerous downstream effects—including a decrease in the cell’s ability to prevent Aβ buildup. As a result, people who inherit the APOEϵ4 version of this gene are significantly more likely to develop Alzheimer’s disease. Some reports have found that approximately 27% of the united states population have inherited at least one copy of the APOEϵ4 version of APOE. Based on a large study done in 2011, those who inherit two copies of APOEϵ4, one from each parent, have about a 28% chance of Alzheimer’s development by the age of 75, compared to just 1.8% in people without any copies of APOEϵ43.

On the other end of the spectrum is APOEϵ2, which is believed to be protective against Alzheimer’s because it’s 40% less common in people who get Alzheimer’s compared to people who don’t2. To put it another way, someone who has Alzheimer’s is less likely to have the APOEϵ2 gene. Curiously, APOEϵ2 is also associated with increased levels of Aβ—suggesting that the APOE gene contributes to Alzheimer’s development through more than just Aβ regulation2. Ongoing research aims to explore these other potential contributions.

Alzheimer’s is complex, and APOE is not the only factor

Currently, Alzheimer’s cannot be cured, but some research indicates that the age of onset of Alzheimer’s can be delayed with a healthy lifestyle. Genetic tests are available to help people understand their odds of developing sporadic late-onset Alzheimer’s—the most common form of Alzheimer’s and the one that’s strongly linked to the APOE gene. Helix now offers one such test in partnership with ADx Healthcare, which includes genetic counseling to help people understand their results.

It’s worth noting that while APOE is currently the single greatest known genetic factor in predicting late-onset Alzheimer’s development, it’s not the only gene to be associated with Alzheimer’s disease, and that unknown environmental factors may contribute to disease development and progression as well. To learn more, check out our guest post from Dr. Ryan Fortna, founder of ADx Healthcare.