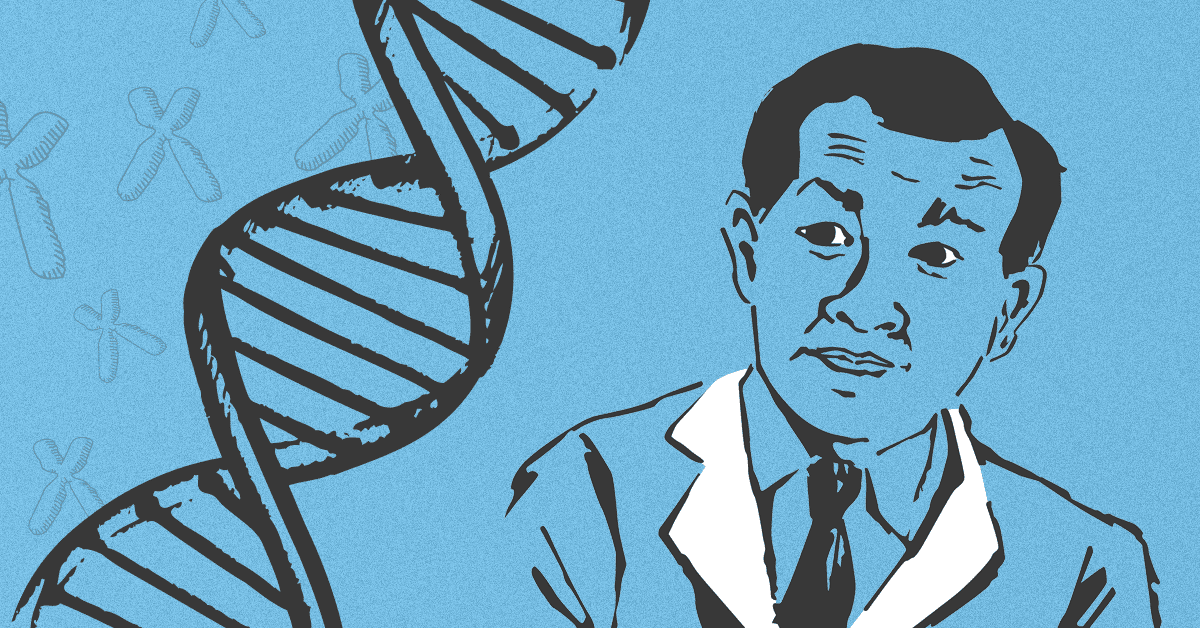 We’re celebrating Asian American and Pacific Islander Heritage Month by shining a spotlight on scientists whose work changed the world. These scientists share a common heritage that traces back to Asia or the Pacific Islands, but they share more than that—each of them had a passion for science that drove them to make history. Join us as we celebrate these figures all month long.

If you look back at the history of human genetics, it’s fascinating to learn how we once struggled to understand concepts that we now consider foundational. Counting is a good example. Though the first half of the 20th century was a golden age for genetics, researchers were having trouble counting the correct number of chromosomes in human cells. In fact, for 30 years, the wrong number—48—was repeatedly counted and confirmed. But in 1956, Dr. Joe Hin Tjio showed the world how to accurately count chromosomes, and in doing so set the stage for numerous medical advancements.

Early on, we knew that genes were stored in chromosomes and that different species had different numbers of chromosomes. But counting human chromosomes wasn’t easy, due in part to limited material to work with. What’s more, researchers had to figure out how to separate individual chromosomes from individual cells and then accurately picture and count them. With microscopic photography still in the early stages, most scientists relied on drawing what they could see under the microscope, which could be problematic. However, advancements were made in the 1940s around developing lab techniques that gave researchers the chance to accurately report the number of human chromosomes. Yet no one did—until Dr. Tjio, that is.1,2

Dr. Joe Hin Tjio was born in Java, Indonesia in 1919. He grew up playing with a camera and studying various aspects of agriculture. Early in his scientific career, he gained recognition as a skilled cytologist. Cytologists focus on the cell as a whole and primarily work by preparing cells and tissue for microscopic analysis. Dr. Tjio built on his love of science and photography by learning how to prepare tissue samples for microscopic imaging and analysis.2 These skills are what allowed him to discover the correct number of human chromosomes in 1956 and put an end to nearly 30 years of scientific inaccuracy.

He was willing to question what most scientists accepted as fact

The prevailing belief in genetics was that the correct number of chromosomes was 48. In the 1920s, Theophilus S. Painter reported 48 chromosomes using the techniques available to him. However, these techniques made it very challenging to accurately count, and later generations of cytologists noted that it was remarkable he had even gotten close. For nearly 30 years, researchers believed his finding was the correct number and would either distrust or explain away results suggesting otherwise. By preparing human cells with cutting edge techniques and adeptly imaging them, Dr. Tjio and his colleague Dr. Albert Levan provided irrefutable proof that humans have 46 chromosomes in diploid cells. Dr. Tjio’s chromosome preparation was so well done, and his images so clear, that it proved Dr. Painter wrong and changed the prevailing dogma.1,2

Providing the correct number of chromosomes—and demonstrating how they prepared the cells for this type of analysis—was no trivial finding either. Having the correct number of chromosomes allowed geneticists to identify specific chromosomes and their abnormalities. Just three years after Dr. Tijo and Dr. Levan published their findings, other researchers were able to discover that Down Syndrome was the result of inheriting an additional chromosome. Building off of Dr. Tjio’s and Levan’s findings, numerous genetic and medical discoveries were made.2

Having survived imprisonment and torture during World War II, Dr. Tjio was a tough and resilient scientist.1,2 That mettle proved valuable in his career as he was willing to question what most scientists accepted as fact, disproving a long-held misunderstanding in human genetics and helping advance the field to where it is today.