Dr. Martha Chase: A defining moment in genetics has her name on it 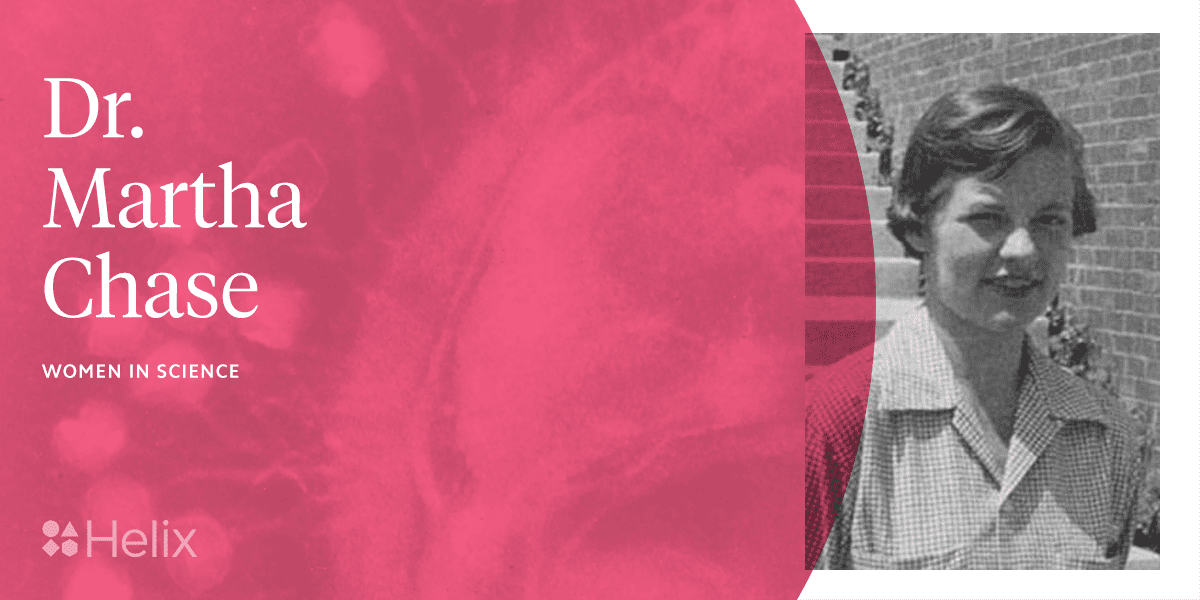 The early 1950s was a revolutionary period in genetics—in the span of just a few years, researchers figured out the structure of DNA and learned that it could carry heritable information from one generation to the next. These foundational discoveries were made possible by the work of two women whose research would help form the basis of modern-day genetics. One was Dr. Rosalind Franklin; the other was Dr. Martha Chase.

Dr. Chase had a relatively short career in science, but it was an extremely productive one. In fact, she managed to make a historic discovery before she had even started graduate school. As an undergraduate in Wooster, New York, Chase studied the genetics of fruit flies. This early exposure to genetic research gave her the background she needed to immediately get a job after graduating as a laboratory technician in the lab of Dr. Alfred Hershey. Typically, technicians are expected to perform experiments that are designed and interpreted by other researchers in the lab. Many have broken this mold, however—and Dr. Chase was one of them, working alongside Dr. Hershey in his lab and helping to design and execute transformational experiments concerning the inheritance of genetic material.

In the early 1900s, most scientists believed that genetic information had to be stored in complex biomolecules such as proteins. Little was known about the structure of DNA at that time, and researchers thought that DNA was just too simple to serve a role in genetic inheritance. That would all change, though, after a series of experiments that started in the 1940s, culminating with the Hershey-Chase experiment1.

The Hershey-Chase experiment showed that DNA, and not proteins, is passed from generation to generation1,2. Hershey and Chase did this using radioactive viruses. Cool, right? Here’s how it worked: The two researchers used what’s called a bacteriophage, which is a virus that infects bacteria and essentially causes them to turn into virus factories, mass producing more of the virus. To do this, the virus has to pass some genetic information that tells the bacteria how to make the virus.

This made bacteriophages a perfect model for investigating whether proteins or DNA served as genetic material. Dr. Chase and Dr. Hershey made two different kinds of bacteriophage: one set with radioactive DNA, and one set with radioactive proteins. The premise of their experiment was to use each set of the viruses to infect separate sets of bacteria. Then, they would isolate the bacteria and test it for radioactivity. Whichever set donated radioactive material to the bacteria would show which material—proteins or DNA—was being passed from the viruses. They found that the bacteria only became radioactive when infected with viruses that had radioactive DNA1. Dr. Chase and Dr. Hershey co-authored a paper2 announcing these findings which established DNA as the source of genetic information, cementing their legacies.

Shortly after this discovery, Dr. Chase went on to get a PhD from the University of Southern California. Five years after that, Dr. Hershey was awarded the Nobel Prize in Physiology or Medicine for his work in the Hershey-Chase experiments, but Dr. Chase was not acknowledged. After getting her PhD, Dr. Chase’s life changed course and she left the world of science. Despite her relatively short career in the field, her name is written in biology and genetic textbooks everywhere because of the immense impact of her work.

Thanks to her love of science and her passion for puzzles, Dr. Martha Chase was able to solve one of the greatest puzzles in the history of modern science. For that, she will always be remembered.

2Hershey, A. D., and Martha Chase. “INDEPENDENT FUNCTIONS OF VIRAL PROTEIN AND NUCLEIC ACID IN GROWTH OF BACTERIOPHAGE.” The Journal of General Physiology 36.1 (1952): 39–56. Print.