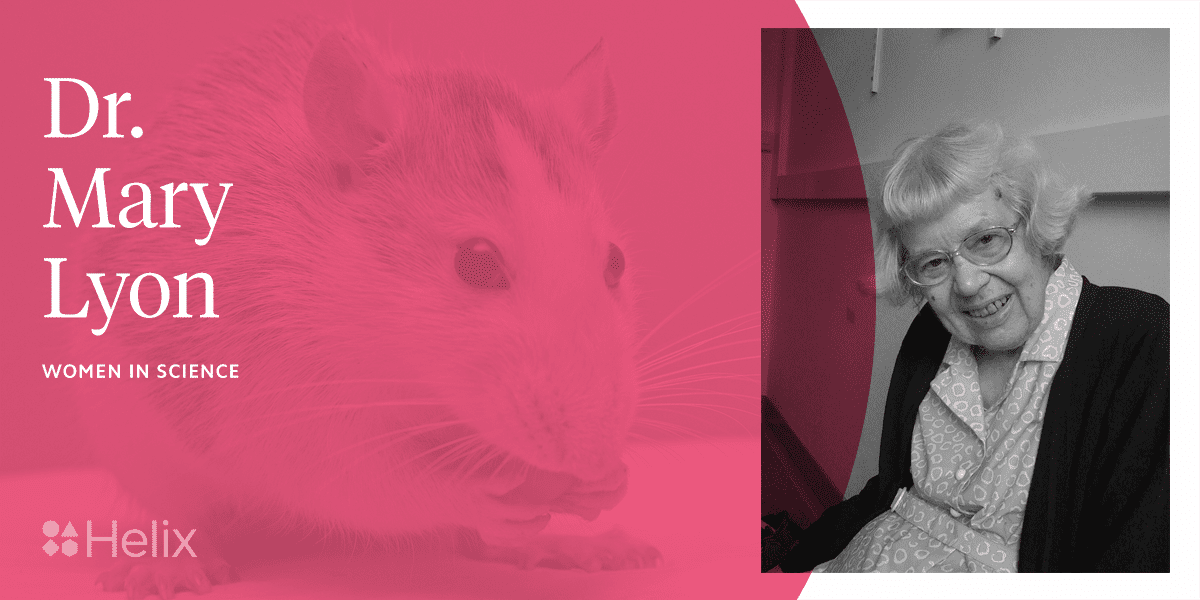 Genetic research demands endless passion and curiosity about life. To make discoveries, one has to be willing to learn and continually question what we think we know. For example, have you ever wondered why a calico cat’s hair color pattern is the way it is? The answer to this seemingly innocuous question involves a fascinating concept in genetics known as X-inactivation. The discovery of this phenomenon would later help us understand patterns of developmental biology and diseases like muscular dystrophy. At the origin of this discovery is a women by the name of Dr. Mary Lyon.

This is interesting because the genes encoded on the X chromosome produce proteins which have a strong influence over our physical being. Naturally, you might then wonder if people with two copies of the X chromosome have nearly double the amount of proteins being produced when compared to people with an X and a Y chromosome. The answer is no, and it has to do with a process called X chromosome inactivation (XCI for short).

Very early on in development, the cells of a female embryo will select one copy of the X chromosome to turn off. This is because if both X chromosomes are used to produce proteins, it can be detrimental to the cells and the embryo. To prevent this from happening, each cell coats one X chromosome with a type of RNA known as long noncoding RNA, which effectively turns the chromosome off1. XCI takes place when an embryo is comprised of just a small number of cells. At that time, each cell makes a choice to turn off just one X chromosome. Once a cell makes this decision, it never changes. Even when these cells continue to grow and divide, the initial choice of which X chromosome to inactivate is maintained1. This is where it gets interesting, though: Each cell chooses independently of the others. For the organism, this means different parts of the body develop with input from one copy of the X chromosome, while other parts of the body develop using the other copy1. This is called mosaicism.

The concept of XCI was first proposed by Dr. Lyon, who described it early in her career while studying various types of DNA mutations in mice1-3. She observed that the fur color of some mice was patchy and contained a combination of colored stripes. She also noted that this pattern seemed to be inherited only in females; the males either died or had white fur.

Combining this information with previous findings in the field, Dr. Lyon formed a hypothesis: There was a mutation on the X chromosome which, if inherited on its own, was lethal—this explained why some male mice died. Those who inherited the regular version would be okay and have white fur. Meanwhile, in females with the blotchy fur color, Dr. Lyon reasoned that they have two chromosomes, only one of which is mutant. Because they only had one version of the mutant chromosome, they could survive. But in regards to their coat color, she hypothesized that the female embryos randomly chose which chromosome to turn off—either the mutant X chromosome or the regular X chromosome. These cells would go on to define the fur color of the mice. If a patch of fur came from a cell that inactivated the mutant version, it would be one color. If the patch came from a cell that inactivated the regular version, it would be another. This mosaicism served as proof of XCI2.

In the decades that would follow, XCI would help explain why some diseases have a spectrum of penetrance and contributed significantly to our understanding of human development3. It also explains why calico cats have such a curious coat color!

Early in her life, Dr. Lyon developed a passion for science and quickly turned her attention towards topics like zoology and biology, setting the stage for her to become a preeminent geneticist2. She had a very long and productive career studying genetics in mice. Her contributions helped us better understand concepts like recombination and how transposable elements can affect gene regulation. Amazingly, she graduated from college without a bona fide degree, because women at Cambridge were not granted them at that time. Nonetheless, she continued to study science, made a career of it, and pushed the field of genetics forward.