National Coffee Day: How does caffeine affect your sleep? 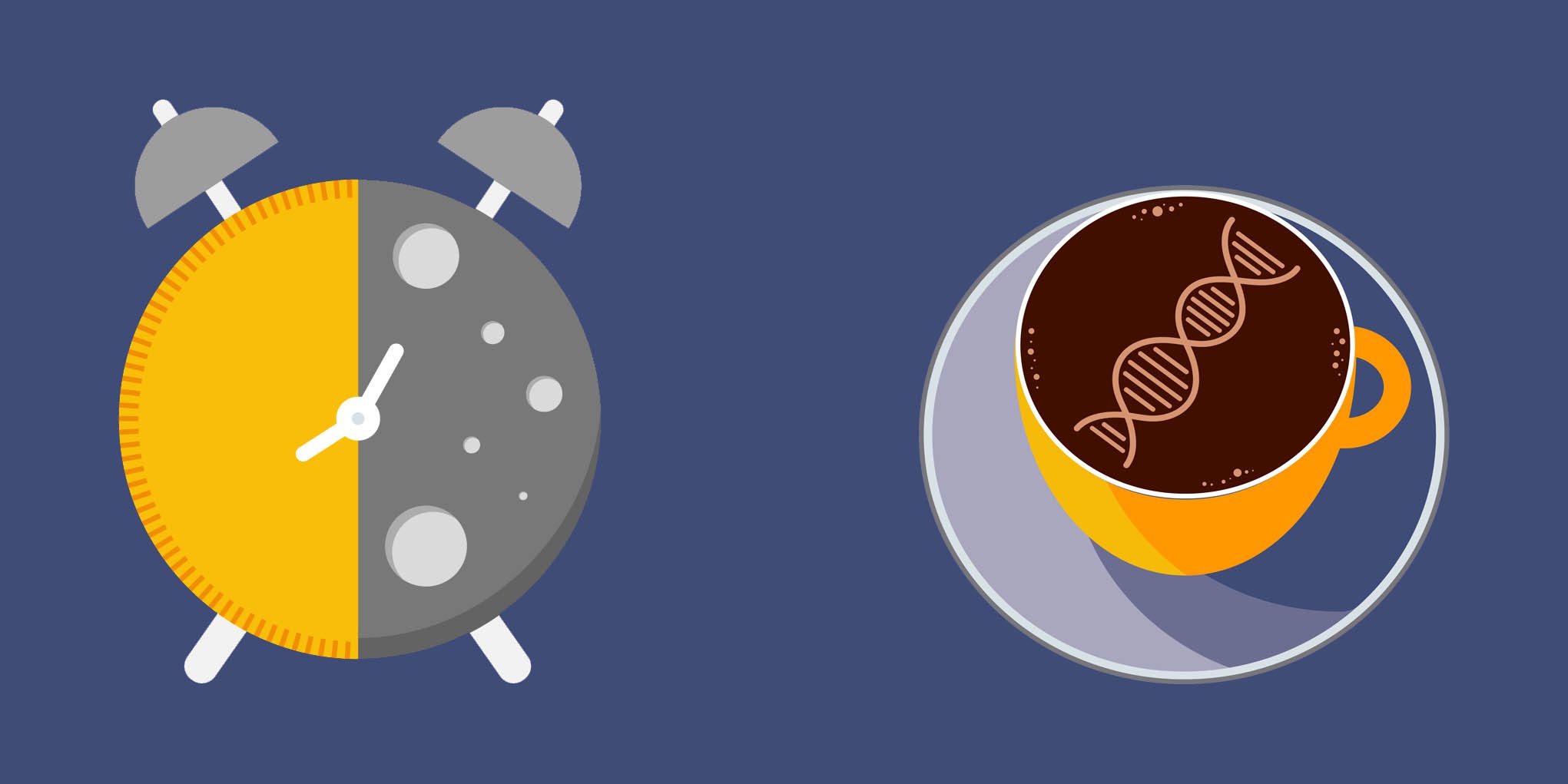 In defiance of our sleep habits, coffee allows us to carpe that diem—and we at Helix raise our cups to the early risers and night owls alike. So as the world celebrates National Coffee Day today, we want to explore the genetics behind sleep and some of the ways your DNA shapes your body’s response to caffeine.

How rested you feel can be influenced by a number of factors including the food you eat and slight differences in your DNA, also known as genetic variants. The sleep/wake cycle is a complex process that is continually integrating cues from your environment. Within this cycle, your genetics contributes to the way your internal clock works, as well as your body’s ability to interpret external cues. Caffeine is one of these external factors. Your DNA determines how your body responds to caffeine in multiple ways. For starters, it influences how caffeine interacts with sleep signaling in your brain. It also has an impact on how quickly the chemical is metabolized.

Researchers have come to believe that there is an internal “sleep pressure” system which tracks how long we’ve been awake, eventually passing a critical threshold at which point we feel an increasing need to sleep. Once asleep, that pressure is released down to a threshold point where we then wake up. This model is still just hypothetical, but we do know that there are some key neurotransmitters (brain signaling factors) that contribute to it. One of these neurotransmitters, adenosine, increases sleepiness. Interestingly, the caffeine molecule resembles adenosine, and can actually block its ability to stimulate sleepiness. This is believed to be one of the main reasons coffee helps us stay awake.

We’ve previously talked about how a genetic variant in the DNA coding for CYP1A2—the protein responsible for breaking down caffeine—can affect a person’s sensitivity to caffeine. Depending on your CYP1A2 variant, you may metabolize caffeine faster or slower, resulting in a lower or higher sensitivity to caffeine’s effects. It turns out that there are also gene variants that affect how awake you feel in response to caffeine intake. Variants in the DNA coding for ADORA2A, the protein responsible for sensing adenosine, make you less prone to the effects of caffeine. People with that ADORA2A variant are considered “caffeine insensitive” because they report feeling less awake in response to caffeine than individuals without the variant.

We know that caffeine can affect sleep habits, but it turns out that it’s not just caffeine that can do this. Our bodies have an internal clock, also known as the circadian clock, that ticks away with a predictable rhythm. In the research lab, this is often represented by a series of nearly identical waves on a chart, with the distance between wave peaks (when you’re most awake) being approximately 24 hours apart. This internal clock is tightly related to the rhythmic buildup of “sleep pressure.” Each day the clock receives input from the environment including light, temperature, and food. Light is the predominant factor that sets your internal clock by triggering light receptors in the back of the eye. This sets off a chain reaction where neurons fire signals back to a deep part of the brain known as the superchiasmatic nucleus. This region of the brain is the primary control center for the body’s clock, and it’s able to sync up cells throughout the body by releasing hormones. The time, type, and amount of light that you’re exposed to during the day and night influences this control center.

Each of your cells has its own circadian rhythm, too, with different parts of your genome used at different times of the day and night. In response to signals from the brain, specific genes become activated in your cells to help set and regulate the rhythm of this clock. Research has shown that variants in the DNA affecting these genes can have significant effects on a person’s sleep/wake cycle. As an example, variants of the CRY1 (cryptochrome 1) gene can result in Family Delayed Sleep Phase Syndrome, an insomnia-like disorder that shifts one’s circadian cycle so the person stays up later than usual (often by 2 hours or more). Genetics can also influence sleep in ways not associated with any kind of disorder. Some common gene variants can affect whether you’re a “morning person,” while other variants can help make you a night owl. Assessing these variants enables scientists to gain insights into people’s likely sleep preferences.

Achieving peak wakefulness in the day and optimal sleep at night is a challenge. Your DNA can influence your body’s internal sleep pressure by altering caffeine metabolism, dulling the body’s ability to sense caffeine, and shifting your sleep phase to earlier or later times of day. Certain products offered in the Helix Store explore some of these genetic variants , like CYP1A2, to determine people’s sensitivity to caffeine. Knowing how your body interacts with caffeine and sleep may help you understand how to better seize the day—or the night.