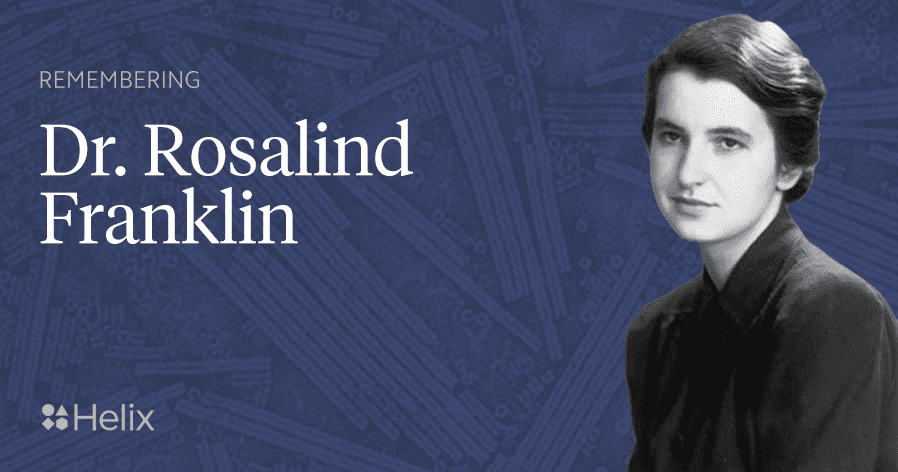 What do viruses, DNA, and coal have in common? They were all studied by Dr. Rosalind Franklin. Though she considered herself a chemist, Dr. Franklin was a multitalented researcher whose work required her to be a skilled engineer, mathematician, physicist, and biologist. Many know her as a driving force behind the discovery of DNA’s double-helix shape, but she had a wide and varied career that led to many scientific discoveries.

Dr. Franklin started her science career in the midst of World War II, when she published five research articles describing the molecular properties of coal. Dr. Franklin’s findings had significant applications in the wartime effort not only because coal was a major source of fuel, but also because it was used as a filtration system in gas masks. Some types of coal seemed to allow larger chemical molecules to pass through, while others didn’t. In the course of working on her PhD, Dr. Franklin figured out why this was by describing the molecular structure of coal and observing that the carbon density (the amount of carbon in the coal) and the temperatures the coal is exposed to can affect what passes through it.

Dr. Franklin started her science career in the midst of World War II

Of course, this impressive start to her scientific career is often overlooked because of the groundbreaking work she did at King’s College in London, where she helped describe the physical structure of the DNA double helix. In the 1950s, scientists were still learning about DNA’s basic properties, and its physical structure was a mystery before Dr. Rosalind Franklin came along. She had expertise in a technique known as x-ray crystallography, which made her particularly valuable in biomolecular research. This technique traps molecules in a crystal which is then blasted with x-rays. These x-rays bounce off of the trapped molecules in a unique pattern that allows researchers to determine the shape of the molecules in the crystal. X-ray crystallography is notoriously difficult and required Dr. Franklin to be a skilled mathematician—she typically had to do hundreds of calculations by hand in order to interpret the results.

Using this technique, Dr. Franklin produced a picture of DNA—which at that time had never been seen before—and proved that it had a helical structure. This discovery is often attributed to Dr. Francis Crick and James Watson because they published a theoretical paper describing the helical nature of DNA just months before she could. Unbeknownst to her, Watson and Crick had been given information about Dr. Franklin’s unpublished findings earlier that year. Without her results, they would not have been able to publish their famous paper describing the structure of DNA. For this work, Watson and Crick were given the Nobel prize in Physiology or Medicine in 1962; they did not acknowledge Dr. Franklin’s role in their finding until many years later.

Dr. Franklin later went on to publish more than 21 papers describing the structure and properties of viruses. Her work allowed us to see biology at the molecular level and gave us a glimpse into the microscopic world. While only 17 years elapsed between the start of her PhD work and her death from ovarian cancer in 1958, she managed to publish more than 40 articles on the molecular properties of carbon, DNA, and viruses. Her work was pivotal to the advancement of science—and she remains a role model in many senses of the word.